For old time’s sake, Aziraphale choses the Number 19 bus as his method of travel to what has to be the final location. He daydreams about Crowley sitting behind him, whispering schemes and making plans, remembering a time when their arrangement was nothing more than stolen conversations in London locations.

Aziraphale makes his way towards his destination with the speed of someone that hasn’t seen their beloved in 6,000 years, never mind a few hours. Whilst the bandstand once held awful memories of rejection and sadness, Aziraphale and Crowley make a point of taking a stroll, arm in arm, around the park every now and again to remember how far they have come. After all, not only are they on their own side now, but they also have a mortgage.

So confident is Aziraphale that Crowley will be waiting for him, he nearly drops his new mobile phone when he sees that the bandstand is empty. Before the nerves of old have time to kick in, however, said phone begins to ring:

Aziraphale does a happy little wiggle. He has no problem following that instruction at all.

A frivolous miracle later, and he's at the Ritz. And there, at their usual table, is his demon. Crowley looks up at him, slowly raising one eyebrow.

"Well," Aziraphale huffs as he takes his seat. "That wasn't difficult at all."

"Enjoy learning about modern technology, did you?"

Aziraphale glances at his new phone. "I suppose it has its uses," he concedes. "But you could have just put this in a box under the apple tree.

Crowley gives a little shrug and sips his wine. "I could have. But what would be the fun in that?" 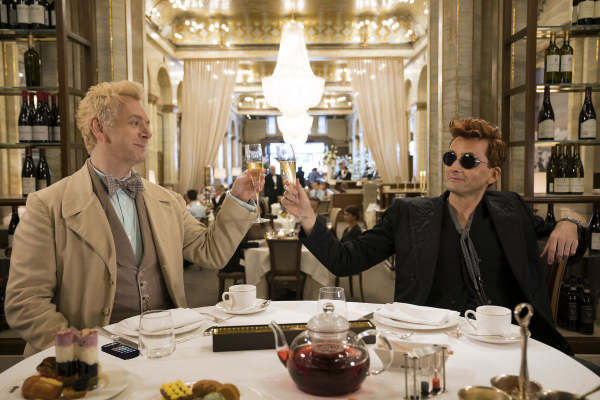 Congratulations! You have completed the TIC3 Scavenger Hunt: Revenge of the Serpent.
Check out your position on the leaderboard.